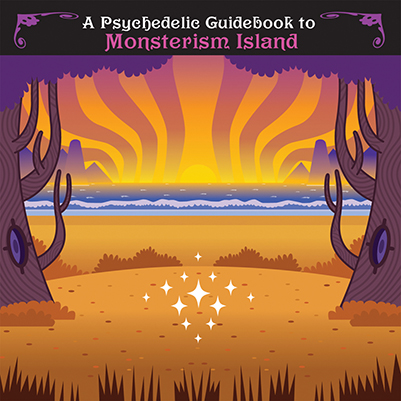 A Psychedelic Guide To Monsterism Island

Pete Fowler’s Monsterism Island has long been known as a musical cornucopia and an album full of esoteric musical treats makes perfect sense. This CD contains original compositions from some of the underground’s most intrepid musical explorers. Spanning monstrous rock fry ups, electronic exotica via psychedelic folk and spooky krautrock. Featuring members of The Super Furry Animals, Jerry Dammers, The Ukulele Orchestra of Great Britain, The Future Sound of London , Beyond The Wizards Sleeve, Luke Vibert, Cherrystones, Circulus, Belbury Poly, The Advisory Circle and many more.

“Come, hold my hand and let me take you on a trip to a mythical realm. A realm where you will encounter all manner of strange and beautiful creatures…a land that will boggle both the mind and the eyes. Oh, and there will be music… not music like you’ve heard before, oh no dear reader, but the most other-worldly, unusual and beauteous music – psychedelic surf salutations, acid jug band blues and spooked voodoo lullabies. Music created by myself and my fiends to make your trip to Monsterism Island a truly unforgettable one.”